I am still working with the Distressed Glue technique that I used in the previous post.  It really is a lot of fun and so easy to do.

Since the leaves are already changing here and Fall is my favorite time of year, I decided to use my new Autumn Accents Bigz Die.  I love the oak leaf on the die and this technique gives some great depth and interest to the piece.

Instead of using my finger to move the glue around, this time I used a dry brush which made things a little streakier..  I really like the effect and the detail it gave to the leaves.  I also like using sponge daubers, as you have more control over the depth of color as well as placement, than with a sponge. 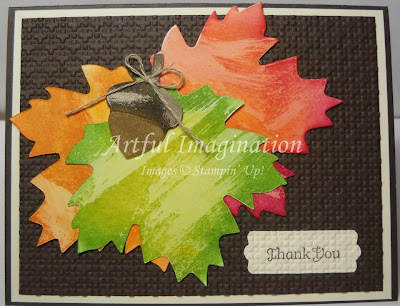 To define the acorn a little better, I used my stylus to create definition between the cap and the nut.  The distressed glue technique was used only on the cap and them sponged with Early Espresso, while the nut was sponged with Soft Suede.  I tied it up with some linen thread and popped it up on dimensionals.

Since the leaves are so "polished" and bold I wanted to give the card some texture, so I Inlaid Embossed the mat piece.  I stamped the sentiment on Very Vanilla and punched it out with the Modern Label punch using the technique I showed in this post.  I adhered that to the Early Espresso mat piece then ran the whole thing through the Big Shot with the Square Lattice Embossing Folder.  It makes it look like the sentiment was "inlaid" into the Early Espresso. 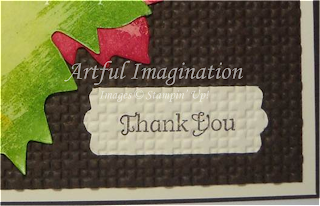 
I LOVE the background on this card!  This is a piece I created when I was initially playing around with the technique.  I used my finger to move the glue around on this one. 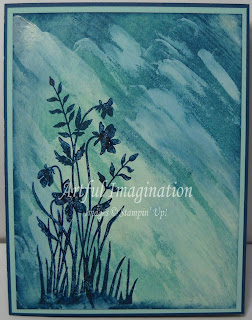 The colors are Pool Party and Midnight Muse.  So awesome together.  I actually don't think I will be keeping this as a card.  I thought about placing a single word sentiment in the upper right corner, but I really don't want to cover up anymore of the background.

I am thinking about framing it and/or using it in a mixed media piece.  What do you think?  What would you do with this background and silhouette?

Speaking of mixed media...I will be sharing some pieces I have been working on pretty soon.  I am very excited about the pieces I have created and how this art form has expanded my creativity.


I found a cool new technique on SCS a few days ago.  Well, it's new to me anyway.  It's called Distressed Glue and is a lot of fun.  You can use it on small pieces or make really interesting backgrounds.

My youngest niece is very much a girlie girl, and her favorite color is pink.  So, for her birthday card I used Pretty in Pink and Rich Razzleberry to make a background using the technique.  I wasn't that thrilled with it when I was done, so I used the Floral Frames Framelit dies and the Daydream Medallions stamp set to turn it into a flower.  The leaves are from the Autumn Accents die in the Holiday Mini catalog and were colored with Old Olive using the same technique. 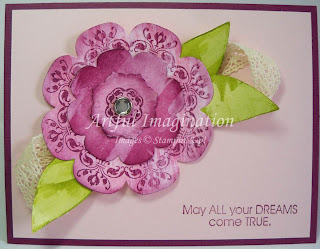 This even falls into the quick and easy category.  The technique only takes a couple of minutes to do and the card itself is pretty straightforward.

After creating the background, I stamped the Medallions in Rich Razzleberry and used the framelits to create the flower by simply layering three pieces and holding it together with a Clear Rhinestone brad.  The leaves were adhered with glue dots. 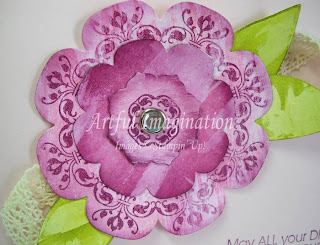 The flower still looked a little blah on its own, so I jazzed it up a bit with some Victoria Crochet trim looped behind the piece.  The sentiment is from Int The Stars (retired) and is stamped in Rich Razzleberry.  There you go, easy! 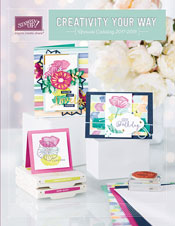 All content (including text, photographs, and design work) is © Kym Schwinkendorf. My original artwork is for personal inspiration only and may not be copied for publication or contest submission.

Unless otherwise noted, all stamped images used are © Stampin' Up! and all terms of their Angel Policy apply.